A palletizer or palletiser is a machine which provides automatic means for stacking cases of goods or products onto a pallet.

Manually placing boxes on pallets can be time consuming and expensive; it can also put unusual stress on workers. The first mechanized palletizer was designed, built, and installed in 1948 by a company formerly known as Lamson Corp. There are specific types of palletizers including the row-forming which were introduced in the early 1950s. In row-forming palletizing applications loads are arranged on a row forming area and then moved onto a different area where layer forming takes place. This process repeats until a full layer of goods and products are configured to be placed on a pallet. 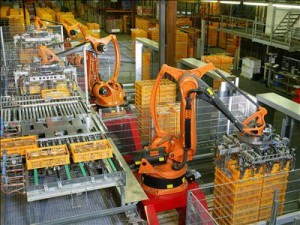 The in-line palletizer was developed in the 1970s when higher speeds were needed for palletizing. This palletizer type utilizes a continuous motion flow divider that guides the goods into the desired area on the layer forming platform.

Robotic palletizers were introduced in the early 1980s and have an end of arm tool (end effector) to grab the product from a conveyor or layer table and position it onto a pallet. Both conventional and robotic palletizers can receive product at a high elevation (typically between 84” – 2.13m to 124” – 3.15m) or low “floor level” elevation (typically at 30” – 0.76m to 36” – 0.91m).